On Monday, we were due to take the hire car back to the airport, so popped down to the café for some raisin toast before making an early start down the . We made good time, handed back the car, and then took a taxi into central .

We dropped off our bags at the hotel, which was on Little Bourke Street next door to the Punch Lane wine bar, an old haunt from Jason’s days. First port of call in was the art gallery, where we were searching for a picture that Nicola had seen once, long ago (and possibly in a far-off galaxy). Our search was unsuccessful, so we then set out on a more realistic search, for some lunch. We walked along the length of the South Bank, seeing the sights along the way, then went to a restaurant of Jason’s choosing on the river, Pure South, which provided us with an excellent meal.

After a spot of shopping in the CBD, we reassembled in the Punch Lane Wine Bar for a glass or two of wine and some canapés, before heading out to the main event of the evening – dinner at Movida. This is a tapas restaurant that has grown from a small place (last time I visited Melbourne in 2007) to a three-outlet empire with a large venue on Little Bourke Street. We had a good selection of starter and main course tapas, all brought with a decent time interval between them so that we could drink and enjoy the setting fully. Hero of he meal must have been the braised ox cheeks – beautifully tender and succulent.

Afterwards we walked home amongst the partying revellers of , many of whom were in fancy dress – it was, after all, 31st October.

Next day we went for breakfast at The European, just around the corner from our hotel on Spring Street, opposite the state parliament. There were many behatted people about as it was Melbourne Cup day, and the good citizenry of Melbourne get all dressed up to go to the races.

After checking out of the hotel, we decided to head out of town and down to St Kilda beach, catching a tram down to the main street, and then walking along, taking photos of the local wildlife… 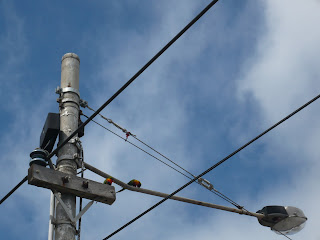 …and the obligatory picture outside the entrance to , the amusement park that’s been there for decades. 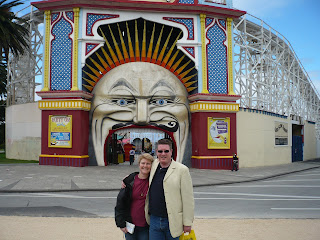 We looked into a number of shops along before lunching at Cicciolina, an old-established Italian named after the famous Italian politician.

Our best-laid plans to return to Castlemaine went slightly aglay as the train we intended to catch turned out not to be running, as it was a bank holiday and so the Saturday timetable was in force. We got back to Castlemaine just in time to pick up Nellie from the café and go home for a quiet night in, after the hecticness of the past two days.

Posted by Rory In Wellington at 1:48 PM