On a rainy Thursday night we braved the weather to go and see Lungs at Circa Theatre. But first, inevitably, dinner. There was a voucher on GrabOne for a three-course dinner at Trade Kitchen, which we’ve not been to in a goodly while, so we decided to give it a go. The nosh is pretty good, but we were a little hurried as we had to move the car as well.

Lungs is a two-hander written by Duncan Miller. It deals with the big question of whether it is “right” to bring a baby into the modern world; because the two protagonists, M and W, are “good people” who, amongst other things, switch off the tap while they’re brushing their teeth. There are no props, and the passage of time is marked in some places by simply walking around and having a conversation which clearly takes place over a number of weeks, months, even years on occasion. Much of the discussion about whether to have a baby revolves around global warming, carbon footprints and the like. Whilst the two characters are very right-on, they’re also quite annoying and unlikeable. 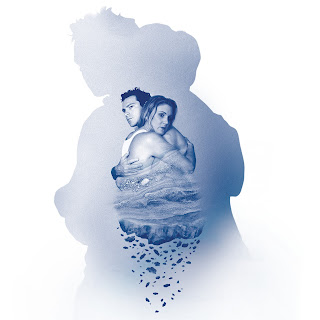 The ending of the play speeds up the time line quite considerably, as we follow the final years of M’s life, dealing with loss of memory and communication with her daughter.

It’s a variation on the usual sort of play; the way the characters talk is a bit more realistic that a standard “drama” delivery, often contradicting themselves and reversing their position mid-sentence. It doesn’t mean that you like these characters, though. In the end, that also makes them more like “real” people.

Posted by Rory In Wellington at 5:17 PM No comments:

At 6:00pm on a rainy Monday evening, I made my way to the Soundings Theatre at Te Papa, the museum of New Zealand in Wellington. It’s here that the Department of Internal Affairs holds its monthly citizenship ceremonies, and after qualifying for citizenship in August this year, I have finally been invited to take part in a ceremony, the final stage of obtaining New Zealand citizenship.

The ceremony involves swearing allegiance to the Queen of New Zealand, who is the same person as the Queen of the United Kingdom. In my 50 or so years on the planet so far I’ve not been required to swear allegiance to her before – I guess it’s taken as read if you’re a British citizen. But swear I must, so I did. They offer you a religious or non-religious option (you can leave out “so help me God” at the end). I’d considered taking a religious tome along with me – the gospel of the flying spaghetti monster – but I figured they may not take it in quite the spirit intended, so just took the atheist text. 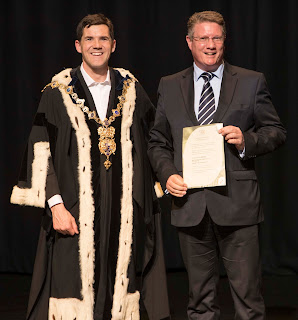 After everyone had finished, we all sang the national anthem, and then exited. We went for a celebratory dinner at Whitebait restaurant in Oriental Bay, one of Wellington’s top feeding stations.
Posted by Rory In Wellington at 2:21 PM No comments:

Apparently, they make wine in and around Margaret River. Sounds like an opportunity for a day out.

We booked a day tour with A Touch Of Glass, a company which, unsurprisingly, offers wine tours. They asked if we had any specific requirements. My only requirement was to visit Leeuwin Estate, about which more later. Other than that, we’re in your hands, I said.

Our driver, Steve, turned up at 10:00 and we set off for the first of our wineries, Howard Park and MadFish Wines. Like all the wineries we were visiting today, this one has been around for quite a while. The Margaret River wine industry got started in the early seventies, and Howard Park has been going since the late eighties. We tasted a variety of wines, concentrating on the regional specialities of SSB/SBS and cabernet sauvignon. SBS or SSB is a blend of semillon and sauvignon blanc – the order of the letters being dependent on which grape is dominant in the blend, and is the signature “drink now” wine of Margaret River, and indeed Western Australia. We also tried some of their rosé, which is made from shiraz, and also had two different styles of riesling. They give you a lot to taste at these places! – typically seven or eight different wines were offered at each vineyard that we visited. We also tasted side by side examples of cabernet sauvignon – one from Australia, one from France, made by the same winemaker, to compare and contrast the flavours. The vineyard has a strong connection and association to a French winemaker, and market under the same name, Marchand & Burch.

In the morning we visited two other wineries, Woodland Wines and Woody Nook Winery, where we stopped for lunch. Both wineries gave us tastings of SSB, chardonnay, and various reds including cabernet sauvignon and various blends. We also tasted several examples of shiraz throughout the day, and each winery was insistent on telling us how their shiraz was different to the typical South Australian shiraz with its strong, peppery flavour – it was more subtle, with a white pepper taste rather than the strong black pepper of SA.

The lunch platter at Woody Nook was pretty satisfying, and also allowed me to recover from nasal fatigue that you get when you’ve sniffed too many wines. That set us up for the afternoon, with more of the same being offered at both Cullen Wines and Vasse Felix, the two wineries that were the first to make wine in Margaret River back in the early seventies. Both offered extremely good wines.

We then took another break from wine to visit the olive oil maker Olio Bello, and sample some of their products. They produce a number of single varietal oils, as well as flavoured oils and other olive oil products and related foods. 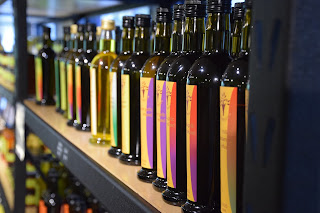 The next winery we went to was a little unusual. Adinfern Estate create not only the usual array of wines, but also some sweet and fortified wines, which include a sweet red cabernet sauvignon/shiraz blend, and a port style wine. It was while I was outside trying to get a picture of a parrot that I was subject to what is a common occurrence in spring in the region – I was “swooped” by a magpie. Fortunately it didn’t actually attack, but it came quite close to my head. This is a behaviour adopted to dissuade people near its nest, and they do so very aggressively.

Our final stop was at Leeuwin Estate. Our driver didn’t like this place as they charge for wine tasting, and don’t refund the charge if you buy some wine (maybe they do if you buy a crate, but not for a single bottle). We did, however, taste some very good wines here, including some side by side from different years for comparison – a 2008 riesling with a 2015 vintage, for example, gave a clear demonstration of how it will age over time. Unlike Mornington wines, which vary significantly depending on the weather for each vintage, they expect their wines to be very similar year after year. It’s therefore reasonable to assume that any given year’s wine will taste similar after x year’s cellaring.

We only bought a couple of bottles for immediate consumption, as we’re not planning on taking any of it back to New Zealand. Whilst tasting the cabernet sauvignons, the youth of the wines was very apparent with a mouth-puckering tannin being the dominant sensation – these wines will need several years in the cellar before they will express their full fruit flavour.

Seven vineyards is a pretty full day’s tasting, and my taste buds were feeling a bit worn out by the end of it. I’d spat nearly all the wine I’d tasted, apart from the really expensive ones where I felt it would be a shame to do so, so was able to enjoy a nice glass of chardonnay from Leeuwin at the end of the day.

Posted by Rory In Wellington at 2:32 PM No comments:

We departed Perth on Monday morning and drove down to Margaret River. It’s a fair hop – around 250 km – but the roads were fairly clear and we made good time to Bunbury, where I’d originally planned to stop off, so we pushed through and made it to Margaret River in time for a spot of lunch at the Settlers pub, before checking into our accommodation and doing a bit of shopping for essentials. We then walked up the road in the evening to Katch Up, a local seafood restaurant, where I had marron and Nicola had a snapper.

Our first full day in Margaret River, and we’re off on a tour of indoor activities as the weather forecast is for dry, yet still quite cool temperatures. Unlike the heat of Perth, where we spent the weekend, it’s several degrees cooler down here – to the extent that I was back into long trousers. we headed out immediately after breakfast to get down to the most south-westerly tip of Australia, Cape Leeuwin, home to Australia’s tallest mainland lighthouse. We climbed the 276 stairs to the top as our guide explained about the construction, manning, and operation of the lighthouse, before it was automated in the 1980s. We looked out for whales but didn’t see any, but did see a hawk out looking for its lunch. 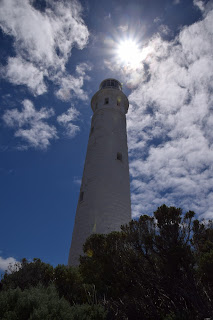 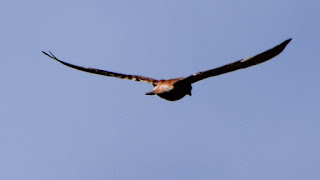 After a quick beverage we drove up to Jewel Cave, one of the four main tourist caves in the region. Jewel cave is known for having the longest straw, a type of stalactite, in Australia, and the second-longest in the world. There’s also all kinds of other stalactite and stalagmite formations, naturally enough. We walked down some stairs to get through the cave complex, some parts of which we had to duck under or around but no particularly tight bits, so we were OK just in street clothes and didn’t need to get hard-hatted and boilersuited, or anything like that. Our guide explained all about the various types of formation and the conditions which led to their particular shapes. 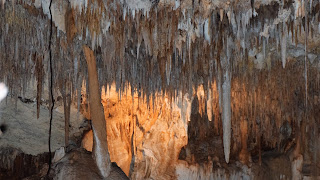 We took in a quick lunch at Café Boranup before checking into the second excursion, Lake Cave. This is entered through a doline, which is a collapsed cave, so we had to descend several hundred stairs just to get to the beginning of the cave system. Lake Cave, as its name suggests, is a wet cave system (Jewel Cave is dry), and once you get down to the water all the walkways are on the same level, natch. It’s not as big a cave system as the Jewel, but there are some spectacular formations there. They also change the lighting effects and switch off the lights completely at one point so you can see what real darkness is – you literally cannot see your hand in front of your face. 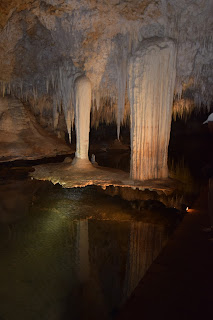 This formation is the star of the show - it's two columns (stalactites and stalagmites that have joined together) formed on a base of sandstone, which has since been eroded away by the water. The former floor of the cave now sits above the water level - that's its reflection you can see immediately below it.

We’d caught the last tour of the day there at 3:30pm so decided to call it a day there, and drove back to Margaret River. We parked up and explored the town centre a bit more so that we could decide on dinner locations for the rest of our week here.

Posted by Rory In Wellington at 12:02 AM No comments: