We flew to Blenheim airport on Sounds Air, who operate a fleet of Cessna 13-seater aircraft. The flight was therefore a lot more personal than a your usual commercial flight – the pilot checks you’re wearing your seat belt by turning round and asking. We were late away from Wellington because they’d encountered a problem on the way in, so a mechanic with a spanner came and tinkered with it a bit before saying “she’ll be right”.

We picked up our hire car at the airport, and drove into Blenheim to the Chateau Marlborough. Unfortunately the weather forecast for the weekend is not good, and it was raining as we found our way to the i-site in town, so we cut our exploration of the town short – although as the rain slacked off we took a look around Seymour Park.

First port of call was Spy Valley winery. It was closed. Damn. We drove down the road to find the “golf ball” communications installations used by the GCSB which give the winery its name. 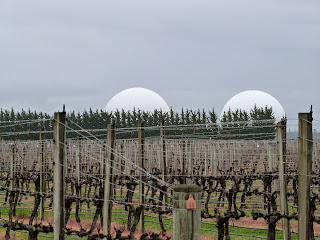 Next up we went to Fromm, where we were greeted by a chap who  apologised that the usual cellar door staff weren’t available, but on the plus side, he was the winemaker. He took us through the usual tasting, and then, as he was so enthusiastic about his product (and we were his only customers) kept bringing us other wines to try – a Riesling that he was about to start bottling (very apple-y) and a Malbec, also from the barrel. We left with a couple of bottles, including a dessert wine. We are somewhat hampered in our buying because we’re flying back, so can’t carry very much.

After that we visited a couple of larger vineyards: Brancott Estate, who invented Marlborough Sauvignon Blanc, where we were subjected to a film showing the history of the vineyard before tasting their product. The sauvignon blanc tastes exactly as a Marlborough savvy should, and a gewurtztraminer with a powerful hit of Turkish delight. We liked their dessert wine a lot so took a bottle of that as well. (Dessert wines come in 375 ml bottles so are easier to transport!) We followed that with a trip to Villa Maria, which although a large vineyard was a lot friendlier than the corporatism of Brancott Estate, and also provided their tasting for free even though we didn’t buy any wine.

Our final vineyard was Wither Hills, where we’d booked for lunch. We had a chat with the cellar door manager about which wines to taste, as she had some “specials” available for us which they didn’t normally have, so I tried some of those whilst Nicola did a comparative tasting of 3 different sauvignon blancs. 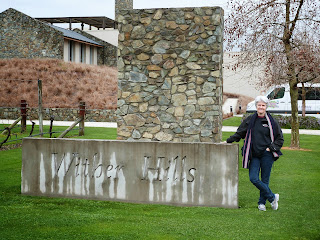 After lunch, we drove to the Omaka Aviation Heritage Centre, and looked around the exhibits there. These are replicas of First World War aircraft, and a lot of their history and relative performance is expounded in the helpful descriptions. The tableaux are all built by Weta Workshops (Peter Jackson is a benefactor of the museum). There are plans to expand the museum to Second World War aircraft once they’ve raised the funds for more display space. 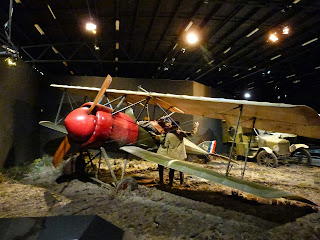 In the evening we went to dinner at the restaurant at the D’Urville Hotel, which was excellent. We were able to identify a lot more of the wines on the list than previously, although unfortunately they didn’t have any Fromm by the glass. We did alright, though. It’s nice to be able to look through a wine list and say “been there”.

Posted by Rory In Wellington at 9:45 PM 2 comments:

The grey warbler, or riroriro, is a typical New Zealand bird. It's small and brownish-grey. They're not even particularly rare.

They're damned hard to photograph, though, as they just won't keep still!


Posted by Rory In Wellington at 11:16 PM No comments:

Originally we thought we wouldn’t be able to take a medal test this time round, because they were scheduled for the weekend we’d already booked to go out to Martinborough. Astute followers of this blog, however, will realise that this was also the weekend when a series of severe earthquakes hit the Central New Zealand region, and the medal tests were postponed as the building needed to be inspected for damage.

The medal tests and social dance were rescheduled for this weekend, so we were able to book a place. As I hadn’t taken a medal last time, we are now out of synch on what we’re doing…maybe at a future date I’ll try and get two done so I can catch up. I was doing my Bronze Bar Latin, and Nicola her Bronze Ballroom. As always seems to happen, I didn’t think I did my best dancing for the test, but when the marks came out it appeared that the judges must have been looking away at the time that I mis-stepped.

In the evening we met up with another couple for a dinner at Osterio Del Toro before the dance, before going and strutting our stuff at the Whitirea Performance centre. Amongst the delights on offer this time was a our instructor teaching us how to do a Zorba the Greek-style dance, which ended in mayhem. It was also one of our party’s birthday, so we toasted him with Deutz bubbles.

At the end of the evening the certificates, medals and judges’ comments are awarded – applause all round.  I was quite pleased with my scores and comments – as usual I am my own harshest critic as I know when I’ve gone wrong, even if the judges didn’t spot it. Anyway, onwards and upwards – next time round I’ll be doing ballroom.

Posted by Rory In Wellington at 10:59 AM No comments:

Email ThisBlogThis!Share to TwitterShare to FacebookShare to Pinterest
Labels: dancing

Having enjoyed One80° Restaurant’s ostrich burger during Burger Wellington, I was pleased when a voucher for dinner for two popped up on GrabOne, so we went there for a pre-theatre dinner looking out over the harbour, with a spectacular sunset going on in the background. We kicked off with cocktails at the bar (the usual Martini & cosmopolitan), then dined on scallops, ostrich steak and chicken curry, accompanied by a Gisborne Chardonnay.

Afterwards we headed across the road to Downstage Theatre, there to see Live At Six. This follows the behind-the-scenes machinations of rival newsrooms (One News and 3News) following an incident when the newsreader of one of the stations got drunk and fell over after an awards ceremony the night before: the incident being captured on smartphones, security cameras etc., and broadcast over Youtube, Twitter and the blogosphere. The incident took place in the theatre’s bar before the play opened, and members of the audience were encouraged to film it, post it on Facebook, and tweet about it. As a result of this, the colours of Nicola’s Pembroke College scarf are now unconsciously lodged in the audience’s psyches forever. 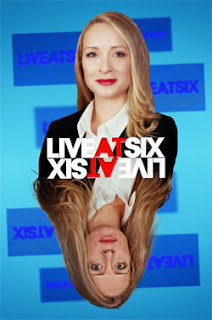 It was resolved with two different takes by the rival stations when they both broke the story at six. The behind-the-scenes wheeling and dealing, personality conflicts and such were well played, and allowed such lines as “this isn’t the news, this is the TRUTH!” and allowing them to work current news stories into the script (in a Drop The Dead Donkey style) The nerds who compiled and edited the footage, recorded telephone conversations and the like were particularly good – playing MMORP games in spare minutes, looking at cute videos of kittens and wearing t-shirts with geeky slogans…just like real life.

Posted by Rory In Wellington at 9:45 AM No comments: