The Play That Goes Wrong

The Play That Goes Wrong is a play that began its London West End run in 2014, and is now touring New Zealand. It’s playing at the Opera House in Wellington, as well as Christchurch and Auckland. As the title suggests, it does not run smoothly.

For dinner, we headed to fave haunt Zibbibo for steak and risotto. Tasty grub, as usual.

Now read on for spoiler alerts…

The play centres on The Cornley Polytechnic Dramatic Society’s production of The Murder At Haversham Manor, a 1920’s murder mystery. It starts with a search for a lost dog, and a stage hand desperately trying (and failing) to fix a mantelpiece on the stage set, before the play opens. The sound technician then makes an appeal to the audience to return a missing personal item if they come across it, as it belongs to him. Then the first-time director comes on stage to introduce the play; due to a large bequest they have rather more funds to stage this play than has been the case in the past, leading to such previous productions as The Lion & The Wardrobe; Cat; and James & The Peach.

Finally, the play opens, with the discovery of the body of Jonathon in his private quarters. He is discovered as he is late for his engagement party, due to take place that evening at Haversham Manor. Immediately, things start to go wrong, largely due to the ineptitude and lack of acting ability of the cast. The backstage crew aren't much better, although the stage manager does sterling work with the candlesticks and later takes a fuller part in the proceedings; and it becomes clear that the sound technician has found his lost item. As the set is also working against them, the actors are forced to improvise in order to continue with the play. The main door, in particular, causes the most problems. Most of the rest of the props also fail, in some cases spectacularly. The cast’s consumption of whisky also leads to much hilarity.

At times, we could hardly hear what the actors were saying, such was the noise of laughter and applause from the audience, following a particularly noteworthy escape from the difficulties imposed by their circumstances. The actors obliged by waiting for us to finish and even repeating lines – something they often had to do anyway, as the next actor missed their cue.

As things go further and further awry, the cast doggedly persist to get through to the end, and the denouement of the murderer.

A jolly night out, catch it if you can!

Posted by Rory In Wellington at 2:16 PM No comments:

Email ThisBlogThis!Share to TwitterShare to FacebookShare to Pinterest
Labels: theatre

Wednesday night, and time to swap out our usual quiz night for the opening of a new play in Wellington, Anahera, at Circa Theatre.

We went for dinner at Field & Green, a restaurant that’s been around for at least a year now but we have so far neglected to try. As part of our “let’s go to different places for a change” I thought we’d give it a go. On a blustery Wednesday evening it was pretty well empty apart from us, largely I guess because of its Wakefield Street location not really being a destination space…I mean, it’s all of two minutes’ walk from Courtenay Place. Maybe it gets busier later on. They do a pre-show menu with two choices of entrée and main, followed by a scoop of their own ice cream or sorbet. I had the beef salad to start while Nicola had the cauliflower soup, then we both had the salmon main course. We had to hurry a little as we were getting dangerously close to the 6:30pm start time, but got out and arrived at Circa just as they were opening the doors.

Anahera is a new play, by actress/writer Emma Kinane. It deals with New Zealand’s “national shame” which is the high levels of child abuse. Instead of taking the easy target, however, the play is set in the middle-class Wellington home of the Hunter family – successful businessman Peter, high-flying civil servant Liz, and their two children Imogen and Harry. It’s not an easy watch, as what appears at first to be a case of a missing 11 year-old boy develops into a darker and more disturbing tale. The play is set in three time periods – when Harry goes missing, when Harry is a grown-up and trying to deal with the consequences of his childhood, and later when the mother is dying. Anahera (which means “Angel”) is the rookie social worker who attends the house scene whilst the police are searching for Harry. Her supervisor has been called away to an emergency so she is left to deal with the family on her own. As she starts to uncover what’s been going on in the house she decides to take a stand.

The cast are all well-known actors – Neill Rea seen most recently in The Brokenwood Mysteries, and Jacqueline Nairn from Shortland Street, as well as A Slightly Isolated Dog stalwart Susie Berry. The main character is played by Neenah Dekkers-Reihana, who we’ve also seen previously several times on stage, and Harry by Simon Leary, recently in Weed, as well as Vanya and Sonia and Masha and Spike, and Stage Kiss.

As I said, not an easy play to watch. But all the same, you should.

Posted by Rory In Wellington at 11:54 AM No comments:

The morning after the concert the night before. Our flight back to Wellington wasn’t until the afternoon, so what to do in Auckland for half a day? We’d done all the touristy things last time we were here (Sky Tower, Kelly Tarlton’s, Waiheke Island) and the weather forecast was a bit iffy so we preferred something indoors, to dodge the showers.

First order of business was to visit something we’d spotted from the windows of Ostro the night before: this is an art installation called The Lighthouse, by Michael Pārekowhai. It consists of a house containing a statue of Captain Cook, with neon lights on the walls. You can look in through the windows and climb the staircase, but you can’t get inside. 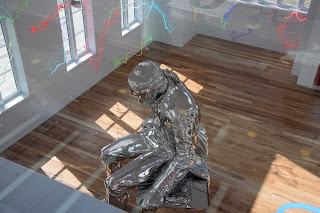 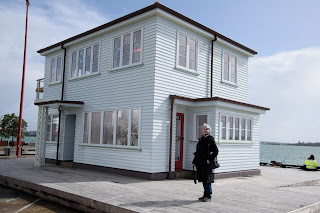 After that we went to Newmarket to visit an old house. In Auckland this usually means “built before 1990”, but in this case it’s a Heritage NZ building from the 19th century, called Highwic, and now open to the public. We explored the interior, including the boys’ barracks (dormitory) which was faintly reminiscent of school. The builder and original owner, Alfred Buckland, fathered 21 children with two wives (not simultaneously!), and the house was variously extended to accommodate his family. In a move of striking modernity, it has not one, but two, indoor bathrooms. All very interesting and historical.

We’d dodged the showers, and decided to walk down Newmarket to find something to eat for lunch. Unfortunately there’s not much to appeal on Newmarket’s Broadway, so we continued on to Parnell and found a little café called Biskit which suited our needs.

After picking up our bags from the hotel, we made our way to the airport, ready to head home. The weather was closing in again, so we were looking forward to getting back to the better weather in Wellington. As the plane was climbing out of Auckland, there was a flash and a simultaneous loud bang…the plane had been struck by lightning. We thought no more of it, until the pilot came on the PA to tell us that they’d checked all their systems, all was working fine, but they had nevertheless been instructed to return to Auckland to get the plane fully checked out. At this stage there were a number of groans from the passengers, particularly when we were told that it would take us around 20 minutes to get back. In that time we could almost have been in Wellington!

Back on the ground in Auckland, we waited for further announcements, and were eventually boarded again onto a different plane. We were delayed about two hours in the end, but got home by about 8 pm.

Posted by Rory In Wellington at 11:18 AM No comments:

Durn Dun DUN! Yes, we’re off to Auckland to See Midnight Oil, as they deign to cross the ditch to two (count’ em!) venues in New Zealand. In their native Australia, they play such places as Alice Springs (pop. 27,972) and Coffs Harbour (pop. 70,000), but they can’t visit New Zealand’s capital? No, Auckland or Christchurch it is, and as the Christchurch gig was on a Monday night, we opted for Auckland.

We got a morning flight and, after checking in at our Adina apartment opposite the Spark Arena, we went to the War Memorial Museum to see the current exhibition of Wildlife Photographer of the Year, on tour from London’s Natural History museum. Pretty much all of it is now professional photographers – the captions contain phrases like “I set up the camera trap in the desired location and after 6,000 exposures over 3 months this was the best picture”. Yes, the picture is great, but is this photography? There is still some amateur photography in the Young Photography sections, and fortunately the number of “tiger splashes through river” photos seems to have diminished.

As the gig started at 7:30, we opted for an early dinner at nearby restaurant Ostro. This is in a block called Seafarer’s Buildings on Tyler Street. I had the seafood options, with seared tuna followed by hapuka (groper to you), while Nicola had beef carpaccio and mushroom gnocchi. Very good food, and the maitre d’ admired my t-shirt as well (it was this one).

A short walk took us to Spark Arena, and I grabbed a t-shirt before we bagged our seats – far end of the arena, facing the stage. The support band were from Wellington, and called The Nudge. They seem to have been around a while.

Then on came The Oils. They opened with Redneck Wonderland – setting the tone of the rest of the gig, this is a reminder that they are, primarily, a rock band, and you’re not in for a quiet night. The set list was specially modified for New Zealand, so Peter Garrett informed us in one of his between-song chats, and included Shipyards Of New Zealand (“yay! They mentioned New Zealand!”). But as any aficionado of The Oils will know, they vary the set list from gig to gig anyway – indeed, they used to have the famous “wheel of fortune”, that they would spin to select what would be played. Whilst they played songs from early and late in their career, the emphasis was on their most successful middle period, with three quarters of the material coming from four albums. They finished up their set with a powerful non-stop run-through of their most well-known songs, from Power And The Passion through Beds, Blue Sky Mine and Forgotten Years, before coming on for an encore including River Runs Red, Dreamworld and Best of Both Worlds. 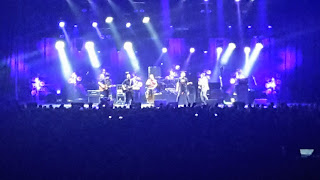 Posted by Rory In Wellington at 5:58 PM No comments: