On the winter solstice, longest night of the year, we headed out to The Tasting Room for some dinner. I had the rack of lamb, which was good, and Nicola had a burger. A couple of glasses of Roaring Meg and The Ned rosé helped it all go down.

What were we doing out? Well, it being a Thursday, we were out at the theatre again. Keeping with the theme of futuristic stuff, tonight’s adventure at BATS theatre was Don’t Date Androids. Oddly enough, this is not a play warning about the dangers of dating androids. Instead, it’s a courtroom drama, which give the prosecution and defence of Zach, who is accused of murdering his android girlfriend. Set in the future (duh!) where androids are a part of society, and following the Android Protection Act, this is the first case to be brought where an android is assumed to have the same rights as a human being.

The facts of the case are clear, and they are not disputed: Zach strangled Ida. But was he acting in self-defence, or was it murder? Evidence is presented by both sides, and at the end of the play, the audience joins the brotherhood of the three obols, and vote on whether they thought Zach was guilty or not guilty.

It was quite good, but once you take the “is she human?” part out of the equation, it becomes a simple court case. Apart from some anti-android sentiment expressed by some of the witnesses, there wasn’t really any discussion of whether androids should be treated as humans, or are they machines which can be switched off? That part has already been addressed by the APA. That the rules are set by humans without android input, in a similar way to such issues as women’s suffrage and slavery were decided by the people who already had the vote, or freedom, wasn’t really discussed. I think they missed a trick there with the more philosophical aspects of the case.

Posted by Rory In Wellington at 4:44 PM No comments:

All Blacks vs. France

The French rugby team are in New Zealand for a series of three test matches, played at Auckland, Wellington and Dunedin. The first match last week was a resounding 52-11 victory for the All Blacks, despite not having played together as a team since last year’s Rugby Championship. Some say the match was gifted to the All Blacks by the second-half sin-binning of the French lock for a high tackle. The ABs scored two tries whilst he was in the bin, but then ran in a further five more for an eight try haul overall.

We had tickets for the Wellington game, where France were expected to try and show up a bit more than they had in the first test. We’d planned to dine at the stadium, as they have recently sacked their old caterers, who were of the cheap pie and chips type, for something a bit more upmarket, in keeping with Wellington’s reputation as the foodie centre of New Zealand. This is a trend that is being seen in stadia around the world, with the public demanding a better quality food experience when they go to see big matches. As part of this, the Piri Burger was announced, designed by former All Black Piri Weepu – the man who almost singlehandedly won the quarter final against Argentina in the 2011 World Cup, thus setting up New Zealand’s win in that competition. As we were queuing for the burgers, a man asked if we had a voucher for a free burger, and promptly handed us one. Wait, was that…? Yes, it was! Piri was helping out at the burger stand, and posing for selfies as well. We’d already acquired one free burger voucher, so we got our burgers for free, and a picture to boot. 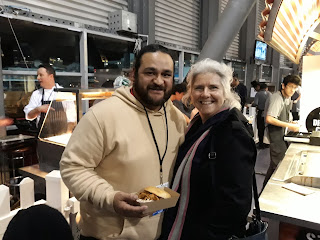 We took our seats up in the nosebleed section behind the posts, and settled in for an exciting encounter. As in the previous week, a slow start from the ABs resulted in France opening the scoring with a penalty. Then, disaster struck! Beauden Barrett leapt high to catch the ball, and was dangerously impeded by a French player, landed badly, and was taken off. The French player was sent off for dangerous play, so France were down to 14 men after only 11 minutes. You’d think that this would mean the ABs would romp home, but some lacklustre play, a lot of handling errors, and failure to capitalise on the reduced French team meant that at half time, whilst they were ahead 21-6, they weren’t really demonstrating the dominance that you’d expect. The French team weren’t giving up, and were turning over the ball far more frequently than they should have been allowed to. In the second half the ABs only added one more try, and missed the conversion, whilst the French, in the 81st minute, ran one in themselves, to give a final score 26-13. 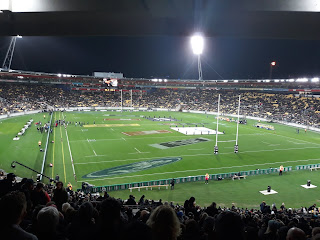 The All Blacks have won the series, and recorded another win over France, but they’ll have some soul-searching to do before the final match in Dunedin. This wasn’t the thriller we’d expected from them, so I hope they’ve got their act back together by next Saturday.

Posted by Rory In Wellington at 11:07 AM No comments:

Email ThisBlogThis!Share to TwitterShare to FacebookShare to Pinterest
Labels: All Blacks, rugby

Last week, a person who shall remain nameless managed to put their foot through the cello, which was on the floor in its gig bag at the time. This necessitated a call to our insurers to make a claim on the contents. 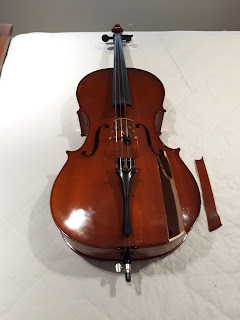 Now, I wasn’t expecting the person in the call centre to be particularly knowledgeable about musical instrument repair, but the conversation did take a slightly baffling turn when she asked what brand it was, and whether it was electric. Nevertheless, the claim was lodged, and a short while later I received a letter by email confirming my claim: 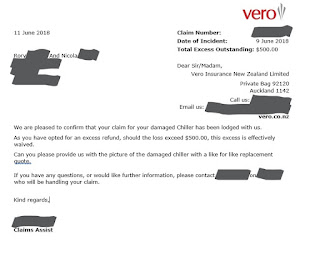 Another email and call later, and it was established that the claim was for a cello, not a chiller. The claims handler still didn’t have much of a clue though, so I gently suggested to him that maybe I’d find out what it would take to repair it; to which he readily agreed.

I put in a call to Wellington’s premier classical music shop, and spoke to the proprietor, Alistair, who put me in touch with a luthier based in Upper Hutt. I arranged to take the cello to him on Saturday.

Thus it was that we took ourselves on a trip Up The Hutts. Wellington, as you know, is made up of four conurbations: Wellington City, Porirua, Lower Hutt and Upper Hutt. The two Hutts, on the Hutt River, aren’t places we visit often – we normally hoon past them on State Highway 2 on our way to the Wairarapa and beyond. But, as we were going that way, we decided to make an adventure of it. After Nicola’s usual orchestra practice on Saturday morning, we drove up to Lower Hutt, to the Dowse Art Museum, which is currently showing an exhibition of contemporary jewellery. 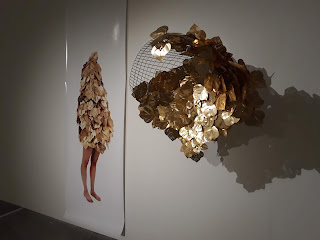 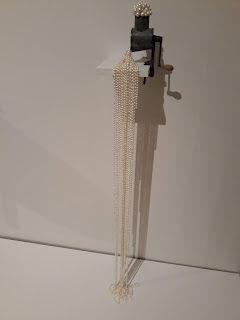 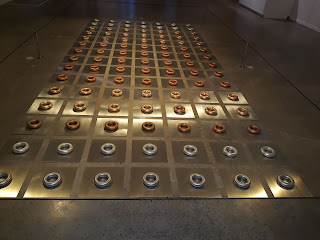 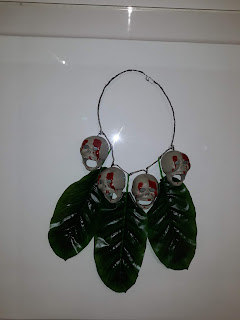 Some of it is just jewellery, but a lot of it is based around what is the idea of jewellery, what it’s for, and how it can be used to challenge people’s perceptions. Art, in other words. We felt very cultured.

The Dowse museum is also home to the Bellbird Eatery, so we stopped for a lunch of Vietnamese chicken salad there, before girding our loins for the trip to Upper Hutt. In fact, the area we were going to was a residential suburb, Totara Park, where we met with the estimable Mr. Collins, and chatted to him about stringed instruments in general, and repairs in particular. He reckons it’ll take him three or four weeks before it’s ready again, and, in his words “it won’t look pretty”. So Nicola will make up some story about how she escaped from Eastern Europe using the cello as a sled, or similar.

Posted by Rory In Wellington at 12:10 PM No comments:

As we’d not been out for dinner for a while, we decided on Zibibbo as an appropriate venue for dinner beforehand. We selected the pre-theatre menu as there was plenty on here to please everyone. There have been some changes since we were last there – the maitre-d’ who can’t remember my name has gone, to be replaced by a Scottish woman who didn’t ask. We did have a question for her, however: as the latest Wellington On A Plate catalogue has just been published, listing all the delights available between 10th and 26th August, one establishment was conspicuous by its absence…Zibibbo! This year, they’re not doing degustation! Quelle horreur! We asked why, and apparently it’s because the owner is concentrating all his attention on his latest project, Union Square. This is handily located in the Martinborough Hotel, in Martinborough, so a bit of a long way for us to go for dinner. Looks like we’ll be skipping that one then, which is a shame, as the Zibibbo degustation had become one of the highlights of WOAP for us.

Before the show begins, there’s a virtual reality show available. You put on a headset and are guided through Wellington of the future, with the bucket fountain listing in Cuba Canal, before virtually crash-landing outside Circa Theatre (which made us a bit seasick) and walking into the virtual theatre.

So, to The Atom Room. 150 years in the future, and global warming, rising sea levels, and nuclear catastrophes have basically buggered Earth. Wellington has been doubly buggered by a magnitude 9 earthquake as well. Danny, an environmentalist, works as a civil servant trying to protect the planet with good grammar. He meets engineer Sarah, played by Circa regular Harriet Prebble. They fall in love, and after three months he takes her to a part of the country where the air is breathable without masks, points out the lovely view – both Wellington and Hutt Islands are visible – and proposes to her. This is a weirdly retro thing to do, but it’s coming back into fashion. Shortly after this, she is recruited to go and work on a new project on Mars, and that’s where the problem starts. They continue to meet in a virtual environment provided by her employers, The Atom Room – where they can see, hear, and even touch (but not smell) each other. This is where the majority of the play takes place, as Sarah’s career blossoms and she is offered an open-ended contract on Mars, whilst Danny loses his job on Earth. As you might imagine, there’s some tension, particularly as they want to have children. Complicating things further are the machinations of Sarah’s boss, Margaret.

The play basically covers the problems of long-distance relationships and distance, the ways and means of overcoming them, how to misunderstand someone, and all the usual problems. And fart jokes. There are fart jokes. Catch it if you can.

Posted by Rory In Wellington at 5:39 PM No comments: