Up with the lark this morning to be picked up at 7:00am and transported to , where we were loaded onto a catamaran along with about 100 other people, and ended up on .

Green Island, surprisingly, is so-called after Captain Cook’s astronomer Charles Green on the Endeavour, and not because it is an island that is covered in (green) rainforest. It’s part of the national park. The island has a hotel and various amenities. We took a walk around the island first (it’s not very big), trying to take pictures of the elusive quails and egrets in the forest. The beach is very picturesque – white sand, blue sea, blue sky, yada yada yada: 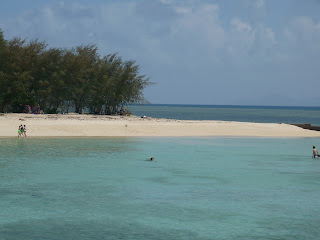 As we walked along the beach, we could see turtles just a few yards away. Our efforts at turtle photography, however, were not brilliant.

After going all the way round the island and stopping for some refreshment, we got hold of some masks, snorkels and fins and went out swimming. Reef fish are abundant around the island, and we saw parrot fish and various other kinds – fortunately none of the jelly variety, although we had taken the precaution of wearing stinger suits, as it is the season for them. Nicola found Nemo. We also saw a ray burying itself in the sand.

We went back to the centre of the island and found that the quails and egrets weren’t quite as elusive as we’d first thought – in fact they were hanging around trying to get scraps of food. The first quail we met I named “Quaily”, and the second one “Dan”. The egrets also weren't shy:

After lunch we sat around lollygagging in the warm sunshine before boarding our boat to take us back.

In the evening we went out to dinner at Palm Cove's best restaurant. More on this later.

Posted by Rory In Wellington at 11:01 PM